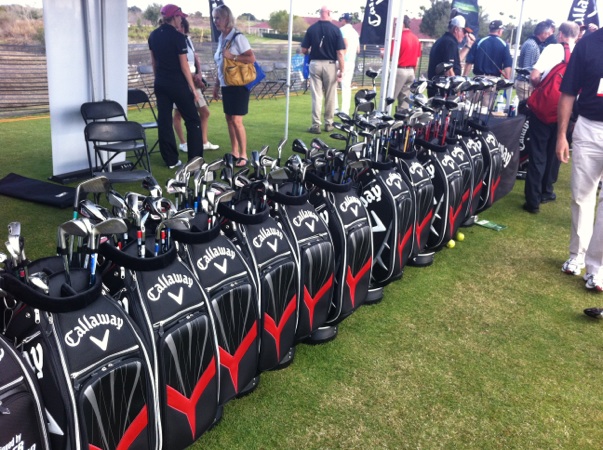 The Callaway Golf Company is one of the world’s best-known brands of premium golf equipment. Callaway Golf Corporation, a global sporting goods company manufactures various golf clubs including woods, irons, wedges, and putters that are sold worldwide. They also produce golf balls and licenses its name for apparel, footwear, and accessories.

Callaway Golf also owns and manufactures products under the Odyssey putter brand as well as Top-Flite and Ben Hogan brands.

The Callaway Golf company first made its name building clubs that were friendly and forgiving for amateur golfers but became famous for its success among notable professionals and endorsers that include Phil Mickelson, Rocco Mediate, Arnold Palmer, Gary Player, and Johnny Miller.

Callaway Golf is perhaps best known for its Big Bertha drivers, the industry’s first wide-body, stainless steel wood, and the club that launched the company to iconic status among pro and amateur golfers.

The Big Bertha would put Callaway golf into the forefront of golfer’s minds as they realized that “Bertha” would help them with long drives beyond their own expectations.

A dynamic leader and famously successful businessman, Mr. Callaway sold his Temecula, CA-based winery for a nice profit and was enjoying a brief retirement before adding club maker to his resume.

Never one to sit idle, he was playing plenty of golf and was on the lookout for new business opportunities when he spotted a wooden pitching wedge in a Palm Springs-area golf shop.

The club was reminiscent of the hickory-shafted clubs he had used as a child, but this shaft was hollowed and filled with a steel core for consistency and strength. He bought half of Hickory Stick USA and renamed it the Callaway Hickory Stick USA.

Mr. Callaway was well known for thinking big, and he did this a lot when forming and growing his company.

Today, the company continues to develop and manufacture technologically advanced golf equipment, including its line of two, and three-piece golf balls, as well as its Fusion FT-3 Driver, which combines titanium and carbon composite materials and allows golfers to choose internal weighting options that can counteract a slice or hook or enhance a draw or fade.

Callaway is preparing to release their latest driver the F-Ti a new technology in drivers with a square head. Phil Mickelson used two versions of the driver, a draw and a fade, in his 2006 Masters victory.

Swedish sensation Annika Sorenstam, who has used and endorsed Callaway Golf equipment for her entire pro career, became the only woman to shoot 59 in competition in 2001 and in 2006 used the FT-3 Driver to earn her 10th major championship victory.

Callaway Golf Company Board Of Directors

Currently eleven members; authorized board size of six to fifteen.
“Substantial majority” must be “independent.” Currently, ten of eleven are independent.

Chairman of the Board: Ronald S. Beard. Written Charter

The Current Board is as follows:

Mr. Brewer is a 1986 graduate of the College of William and Mary and received his MBA from Harvard University in 1991.

Mr. Brewer, 56, has served as a Director and President, and Chief Executive Officer of the Company since March 2012.

Since 2012, Mr. Brewer has served as a Director of TopGolf International, Inc. in which Callaway Golf Company has a minority ownership interest.

Mr. Brewer also served on the Board of Directors of Adams Golf since 2000 until his resignation effective as of February 29, 2012.

Mr. Brewer currently serves on the Board of the National Golf Foundation.

Mr. Armacost is a graduate of Denison University and received his MBA from Stanford University in 1964.

Mr. Armacost, 80, has served as a Director of the Company since April 2003 and is Chair of the Audit Committee. As of April 2010, he is Chairman Emeritus of SRI International (formerly Stanford Research Institute) after previously serving as Chairman. Mr. Armacost joined SRI International in 1998.

Mr. Baxter holds a B.A. in History from the University of Toledo and an MBA from Northwestern University’s Kellogg Graduate School of Management.

He was named Chief Executive Officer in August 2018 when VF Corporation announced its intention to separate its Jeanswear organization into an independent, publicly-traded company. Mr. Baxter has more than 30 years of business experience, including significant experience in the apparel industry.

Prior to becoming the CEO of Kontoor Brands, Mr. Baxter was Group President, Americas West, for VF Corporation and was responsible for overseeing brands such as The North Face® and Vans®.

In 2008, Mr. Baxter was named Coalition President for the Imagewear Coalition, which comprised the Image and Licensed Sports Group divisions. Prior to joining VF, he served in other leadership roles, including at The Home Depot Company, Nestle, and PepsiCo.

Mr. Beard, 81, has served as a Director of the Company since June 2001 and was appointed Chairman in August 2005. Mr. Beard is currently a partner in the Zeughauser Group, a consultant to the legal industry.

Mr. Beard served as the Company’s general outside counsel from 1998 until he joined the Board of Directors. He received his law degree in 1964 from Yale Law School.

Mr. Cushman is a 1963 graduate of Colgate University where he received an Honorary Doctorate in Humane Letters in 2008, and he completed the Advanced Management Program at Harvard University in 1977.

Mr. Cushman, 79, has served as a Director of the Company since April 2003. He has been Chairman of Cushman & Wakefield, Inc. since it merged with Cushman Realty Corporation in 2001, which he co-founded in 1978.

Mr. Cushman also serves as Director and Chief Executive Officer of Cushman Winery Corporation, which is the owner of Zaca Mesa Winery, and which he co-founded in 1972.

He began his career with Cushman & Wakefield, Inc., a commercial real estate firm, from 1963 to 1978. Currently, Mr. Cushman also serves on the board of D.A. Cushman Realty Corporation.

Ms. Flanagan earned a B.S. degree in Engineering from Case Western Reserve University in 1990 and an MBA from the Stanford Graduate School of Business in 1996. Ms. Flanagan has been a member of the National Association of Corporate Directors since 2014.

Ms. Flanagan, 52, was appointed to the Company’s Board of Directors in November 2018. From 2016 to February 2019, Ms. Flanagan served as the Chief Executive Officer of Foster Farms, a leader in branded and private label poultry, headquartered in Livingston, California.

She was previously the President of the Snacks Division of ConAgra Foods, Inc., a packaged foods company headquartered in Omaha, Nebraska, from 2011 until 2014, and served as President of ConAgra’s Convenient Meals Division from 2008 until 2011.

Ms. Flanagan has served since June 2016 as a member of the board of directors of Core-Mark Holding Company, Inc., a publicly-traded company and one of the largest wholesale distributors to the convenience retail industry in North America, and she currently serves on such board’s Compensation and Nominating and Corporate Governance Committees.

Mr. Fleischer earned a B.A. in Economics from Johns Hopkins University and an MBA from Vanderbilt University.

Mr. Fleischer, 52, was appointed to the Company’s Board of Directors in May 2018. Mr. Fleischer is a seasoned business and financial executive with significant experience in the golf industry, having previously served as Chief Financial Officer of Adams Golf, Inc. and subsequently as a board member of Adams Golf.

He has also been both a public and private company Chief Financial Officer, including CFO of Adams Golf, formerly a publicly-traded company, from 2000 to 2002.

Mr. Fleischer has served as a board member for several public and private companies, including Adams Golf from 2005 to 2012, HomeCareHomeBase, Vero Software, Data Innovations, and RogueWave.

Mr. Lundgren is a graduate of Dartmouth College and received his MBA from Stanford University.

Mr. Lundgren, 68, was appointed to the Company’s Board of Directors in March 2009 and is Chair of the Compensation and Management Succession Committee.

Prior to 2017, he served as Chairman and Chief Executive Officer and a director of Stanley Black & Decker, Inc., the successor entity following the merger of The Stanley Works and Black and Decker in March 2010.

Prior to the merger, Mr. Lundgren served as Chairman and Chief Executive Officer of The Stanley Works, a worldwide supplier of consumer products, industrial tools, and security solutions for professional, industrial, and consumer use.

Mr. Lundgren began his business career in brand management at the Gillette Corporation. Mr. Lundgren has been a director of The Stanley Works since 2004 and is a member of the Board of Directors of the National Association of Manufacturers (NAM); Staples, Inc.; and VISA, Inc.

Mr. Ogunlesi, 66, was appointed to the Company’s Board of Directors in January 2010 and is Chair of the Nominating and Corporate Governance Committee.

He is Chairman and Managing Partner of Global Infrastructure Management, LLC, which is a private equity firm with over $15 billion in assets under management and which invests worldwide in infrastructure assets in the energy, transport, and water, and waste industry sectors.

Prior to founding Global Infrastructure Management, Mr. Ogunlesi spent 23 years at Credit Suisse where he held senior positions, including Executive Vice Chairman and Chief Client Officer, and prior to that Global Head of Investment Banking. Currently, Mr. Ogunlesi serves as a member of the Board of Directors of Goldman Sachs.

Prior to joining Credit Suisse, he was an attorney with the New York law firm of Cravath, Swaine & Moore. From 1980 to 1981, he served as a Law Clerk to the Honorable Thurgood Marshall, Associate Justice of the United States Supreme Court.

Ms. Segre holds a degree in economics from Stanford University and an M.B.A. from the Stanford Graduate School of Business.

Ms. Segre, 59, was appointed to the Company’s Board of Directors in August 2015. From 2009 until 2016 she served as Executive Vice President, Chief Strategy and People Officer of Diamond Foods, a San Francisco-based company that produces premium snack food and culinary nut products.

From 1981 until 1985, Ms. Segre was a touring golf professional in the United States, Europe and Asia having won five tournaments including the Irish Open and the Reno Open.

Mr. Thornley is a Director of Cavium Networks. Mr. Thornley received his degree in chemistry from Manchester University, England, and qualified as a chartered accountant.

From February 2002 to July 2005, he served as President and Chief Operating Officer of QUALCOMM Incorporated, the San Diego-based company that pioneered and developed technologies used in wireless networks throughout much of the world. He previously served as QUALCOMM’s Chief Financial Officer from 1994 to February 2002.

Ronald S. Beard has been named Chairman of the Board and presides at regularly scheduled meetings of the non-management Directors held without management present.

In accord with the Company’s Bylaws and the governance policies of the Board, a substantial majority of the Company’s Directors must be independent as determined by the Board. In making its independence determinations, the Board generally follows the independence standards of the New York Stock Exchange.

More specifically, the Board considers whether a director has any direct or indirect relationship to the Company that may interfere with the exercise of the director’s independence from management and the Company.

In evaluating a particular relationship, the Board considers the materiality of the relationship to the Company, to the director, and, if applicable, to an organization with which the director is affiliated.